Between the Canyon: Our Bucket List Trip to the Colorado River 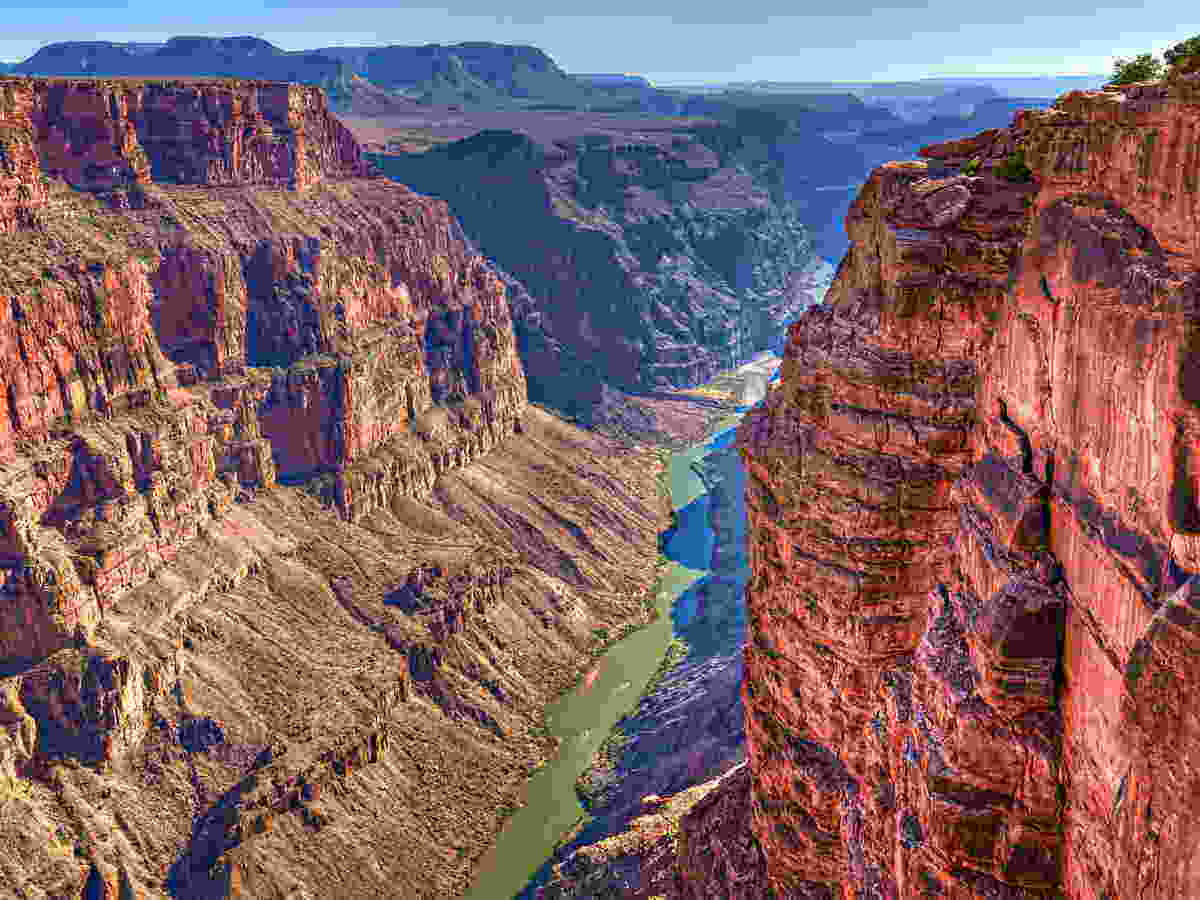 We have been making travel “bucket lists” for years. One of the biggest trips on my husband Mike’s list? White water rafting through the Grand Canyon on the Colorado River. I looove adventure, so I was all in.

I decided to plan the trip for Mike’s 50th birthday, June 2016. Our Arizona adventure turned out to be one we will never forget, exciting in more ways than we could have ever imagined.

After looking at and researching many outfitters and all the options that were available, Mike and I decided the five-day paddling trip would be the best for us (other options included motorized trips, those where the guide paddled, or even an identical trip, just six days longer).

Each day, we hiked the Grand Canyon and paddled our way through very specific named areas and mile markers of the Colorado River. At night we slept wherever our lead guide found a suitable piece of earth for a group our size (13 paddlers, 5 guides).

The canyon was about 115 degrees during the day, and all night that heat radiated off the rock. We slept on a cot in our bathing suits, we were so hot! We didn’t even use a sleeping bag or tent.

We were warned by our guide upon arrival (of course, they declared this after there was no turning back) that we could encounter black widow spiders, scorpions, snakes or lizards. For safety, we were never to walk without our shoes on. It was freaky!

The area we were is known as an International Dark Sky Park, which is land designated so for the exceptional quality views they provide of the starry sky. Words cannot even describe its nighttime beauty. Paired with a glorious full moon, it was truly magnificent. We had a hard time falling asleep, as we were always watching for shooting stars. On average, we saw one every seven seconds!

All labor, no leisure

Mike and I enjoyed every minute of our adventure, even though it was much, much more labor intensive than we could have ever imagined. We had to load and unload the supply rafts twice a day via an assembly line, the paddling was exhausting, and the heat was extremely draining.

The brochure actually implied leisure time, saying: “bring a book to read while your supper is prepared for you by the guides.” In hindsight, this was totally hilarious. After we unloaded the rafts and set up the kitchen, we had to set up our cots and personal belongings. There definitely was NO leisure time!

There are only two rivers in the world that have an area classified with rapids up to “10” (ranked on rapid length and severity). On our fourth day of paddling, we had to pass through the one located on the Colorado River: a half-mile-long stretch named “Hance.”

Mike and I were in the front of the raft listening for our guide’s instructions on how many strokes to paddle and on which side. Ahead we could see the waves—and they were sizable! I had to concentrate on one wave at a time. Hance was a very wide rapid, and the rocks were as big as cars.

Swamped and swept away

We had only navigated a few swells, when one particularly fierce wave, at least eight feet tall, curled up and over us. It crashed down and tipped our raft on its side. Water pummeled us and seized Mike, sweeping him out of the raft and into the rapids. None of us could grab him.

Right away, Mike gave us the “OK” signal from the water. We were all frantic, trying to get back to our places to keep paddling.

The distance between our raft and Mike kept growing, and I was overwhelmed with fear. I watched Mike trying to stay afloat, face forward, legs up. Our guide told me and some of the others, who were crying and panicked, to get it together. We had to keep paddling through the rapids, or we were all going to end up in it.

It was definitely one of the most frightening times of my life. I remember having the most awful thought: “I am going to have to call Mike’s mother and tell her that her son died on the Colorado River.”

Mike didn’t die. He got tossed around until near the end of the rapid, where we finally could navigate and close the gap between us. Our guide and another man hoisted him into the boat. He was completely exhausted from fighting to stay afloat and catching his breath in between relentless waves.

In total, Mike was in the water for about three minutes. This may not seem long, but so much happened so fast. They were the longest three minutes of my life!

Our group hiked out of the canyon the very next day—nine miles in 115-degree heat, plus our backpacks to lug.

Once we made it back, I was spent. We had been paddling for five days, and that last hike had done me in. When I’d first booked the trip, I had had grand plans of hiking the canyon’s South Rim Trail the next day. Not a chance! Instead, we reminisced about our adventure and about Mike’s brush with fate. Although it had only been three revolutions on a stopwatch, it had felt like forever to us both.

We checked off Alaska in 2018, which was the next trip on our bucket list. A couple of other trips we would like to take include hiking the Smokey Mountains in the fall and spending a few days on a sailboat.

I think it is important to have several bucket lists, especially ones for travel. It really has helped us set goals, such as saving money and being in good physical shape to do activities. And, every trip gives me something to look forward to.

We keep our list in our office, and it keeps us dreaming. I’m always up for an adventure!

Kelley Bowker is self-employed and loves spending time with her family and traveling (of course!). She is also a lover of Jesus and anything that brings out her inner personal-development junkie.

To see the full issue go to: https://www.grandtraversewoman.com/nov-dec-2019-issue/